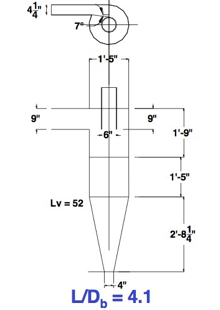 Cyclones have been used to separate solids from gas streams since the middle of the nineteenth century.  These devices are used in a variety of industry applications and cover a wide range of operating parameters.  Early researchers conducted experiments to understand the operation of cyclones and to develop design correlations.  Zenz (1975) developed an empirical procedure which has become a common basis for most cyclone applications.  Others including Muschelknautz (1970) have developed theoretical models to describe and predict cyclone operation.  Cyclone manufacturers have used the results from this early research along with field experience, inspection history, and troubleshooting to develop their own design guidelines in order to improve performance and equipment reliability.  However, industry continues to demand improved cyclone performance and longer equipment life based upon process improvement, government regulations, environmental emissions, and overall profitability.  The PSRI Cyclone Program attempts to meet this need by conducting fundamental research and testing in the following areas:

Historically, cyclones were tested in a batch configuration with an ideal inlet and at relatively low solids loadings (< 0.1 lb/ft3) for the following reasons:

Years of experience running circulating fluidized beds and high velocity fluidized beds at PSRI leads us to believe that cyclones have to be tested in a continuous circulating mode after the solids reach an equilibrium size distribution in that particular circulating system.  Cyclones are part of a system (fluid bed, riser, conveying line, etc.) and as such need to be tested as part of a given system.  De-coupling cyclones from the system leads to erroneous cyclone designs and conclusions.  Cyclones should be tested as part of a system similar to installations in commercial units.

The objectives of the Modeling & Design Cyclone Program are to: